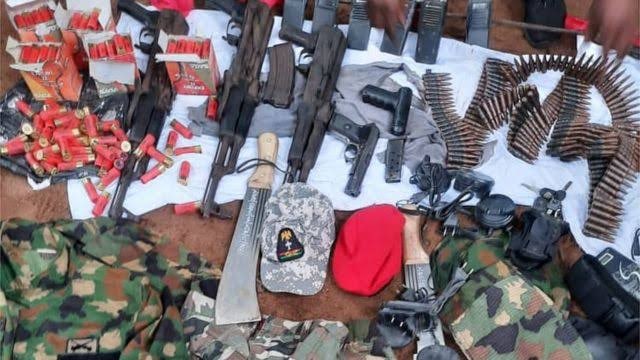 Some hoodlums, suspected to be members of the proscribed Indigenous People of Biafra, (IPOB) and the Eastern Security Network ESN, who in the early hours of March 20th, 2022, attacked the Omuma Police Station, has been killed by the operatives of the Imo State Police Command.

THE VENT REPUBLIC reports that the ESN members armed with Improvised Explosive Devices (IED) reportedly attacked the police station and were shooting sporadically.

But the Imo State Police Command Tactical team in collaboration with operatives of the Department of State Security Services (DSS) swiftly repelled them as they engaged them in a fierce gun battle.

In the ensuing gun battle, four of the IPOB members were killed on the spot while other scampered into the bush having suffered defeat, with a number of them sustaining various degrees of bullet wounds. The operatives the DSS and the Imo State Police however recorded no casualties.

THE VENT REPUBLIC reports that in the operation, charms and five undetonated different capacities of Improvised Explosives Devices were recovered from the IPOB members.

Other members of the hoodlums who fled at the scene of the engagement are currently being trailed by the Command’s tactical teams, who are conducting a vigorous and aggressive combing of the bush, with a bid to arresting the fleeing hoodlums and also to recover their arms and ammunition.