Why Secondus was suspended – Rivers PDP 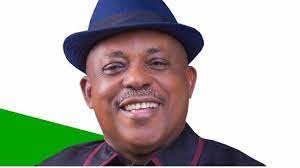 Embattled former Peoples Democratic Party (PDP) National Chairman Prince Uche Secondus on Thursday faulted his suspension, saying that only the National Executive Committee (NEC) has the power to discipline him or any member of the National Working Committee (NWC).

He said those who purportedly suspended him acted contrary to Article 59 (3) of the PDP Constitution, which is clear on the party’s disciplinary measures.

But, defending the suspension, Rivers State PDP Chairman Ambassador Desmond Akawor said the party chairman was ousted because of his refusal to pay his dues in the last four years.

He said Secondus worked against the interest of the party in the state by dividing members of his Ward 5, including issuing a directive that the former Chairman of the All Progressives Congress (APC), Davies Ikanya, whose defection to PDP was considered a big harvest, should not be registered in his ward.

He said: “On June 5th, I wrote a letter to all wards that they should furnish us with the names of the party members that are dead and party members that have not paid their dues including those that had defected for one reason or the other.

“Among the wards that responded was Ward 5 in Andoni. And it clearly showed that he (Secondus) had not paid his dues for the past four years. It is an offence in our party.

Akawor said for deciding to run for a second term in office, Secondus was prepared to rock the boat and work against the collective interest of the South.

He said: “The southern governors took a decision that the presidency should come from the South as an individual or a politician he should have known that it is now time to come home.

“The position he is occupying is on behalf of the South, he didn’t go there as an Andoni  man. he went there because the chairmanship of the party was zoned to the south.

“If southern governors have taken a decision that they desire the presidency to come from the South he should have known that there is no point trying to rock the boat by kicking and running for second term.”

Secondus, in a statement by his media aide, Ike Abonyi, maintained that Article 59(3) of the PDP Constitution states clearly that only the National Executive Committee (NEC) of the party can discipline the National Chairman or any other National officer of the party.”

He urged members of the public and the media to be wary of agents who were out to distract the main opposition party from its focus of rescuing Nigeria.

His suspension was announced by the Ward Chairman, Mr. George Christopher, at the party’s extraordinary meeting in Ikuru town. He said 11 of the 17 executive members endorsed the suspension.

Christopher accused Secondus of not bringing development to the area, despite being in a strategic position of influence.

He added: ”The ward 5 executive of the PDP in Ikuru town on Aug. 31, discussed issues affecting the party.

“The ward executive suspended Secondus after a duly constituted meeting convened by the Secretary on the instructions of the Chairman in accordance with the party’s constitution.”