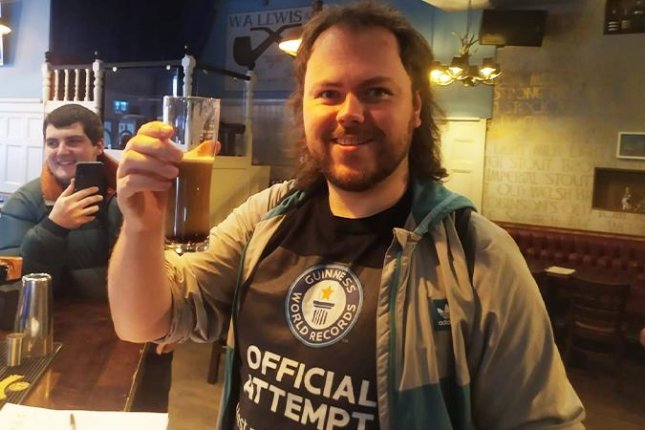 A dedicated drinker in Wales broke a Guinness World Record by visiting fifty-six different pubs in twenty-four hours and having at least one beverage at each.

Guinness announced Gareth Murphy, 29, of Caernarfon, drank at 56 Cardiff pubs in 24 hours on Feb. 5, breaking the record of 51 pubs set by Englishman Matt Ellis in 2021.

The record-keeping organization’s rules required Murphy to have a drink at each pub, but the beverages were not required to be alcoholic.

Murphy said he did have some beer during his attempt, but his drinks also included orange juice, apple juice, Coca-Cola, lemonade, Diet Pepsi and cranberry juice.

“I knew I had to stay off the Guinness as it’s quite a heavy drink. I did have a beer in a few select pubs, but I knew I couldn’t overdo it as I knew the fizz would immediately make me bloated,” Murphy told Guinness World Records.

He said the record attempt led to an increasing number of bathroom breaks over the course of the day.

“I lost count of how many toilet breaks I took. At the beginning it was minimal, once every 10 pubs say, but by the end, I think I was going once every two or three pubs,” he said.

Murphy said the record attempt was “the hardest thing I’ve ever done in my life.”

He said his Guinness World Records certificate will be on permanent display on a shelf in his home.

“It made all the hard work and preparation worth it. It feels great to achieve something like this,” he said.