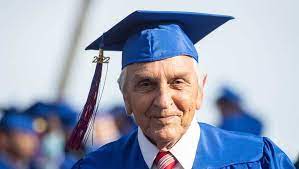 A 78-year-old California man walked across the stage alongside his high school’s class of 2022 to accept a diploma that spent 60 years locked away in a filing cabinet.

Ted Sams, 78, said he was prevented from graduating in 1962 because he was suspended five days before the end of the semester and missed a final exam.

Sams said he made up the exam over the summer, but was told he wouldn’t be given his diploma until he paid $4.80 for a book he failed to return.

“Over the years, I complained to my kids a number of times about how $4.80 prevented me from having my diploma,” Sams told KABC-TV.

Sams’ old school, San Gabriel High School, invited him at last to accept his diploma at the class of 2022 graduation ceremony.

Sams was presented with his original diploma, which had spent the previous 60 years hidden away in a filing cabinet at the school.