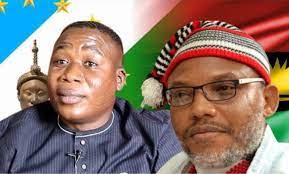 The cry for secession is as old as human existence. All through the ages, man has always cried for liberty anchored on a secessionist agenda.

Historians will never forget the bloody civil war fought in the United States between 1860 and 1864 immediately after Abraham Lincoln was sworn in as the 16th President of the United States. The Union led by the north voted in favour of the abolition of slavery as they needed a market for their goods and services since they had numerous industries. The Confederates led by the south where all the farms were wanted slavery to continue so that their cost of labour will be cheaper. This led to a bloody war which the Union eventually won after four grueling years.

Ireland was part of England for centuries and there was no peace between both countries as the tension was high. For centuries, there have been unsuccessful attempts by Ireland to part ways with England. Ireland’s long drawn secessionist agenda became a reality in 1922 when the Anglo-Irish Treaty was signed between them and England. A Constitution followed up in 1937 which declared them a Sovereign State. Northern Ireland opted to remain with the UK and there was severe crisis between some nationalists there and England. It was finally resolved on April 10, 1998 in the famous ‘Good Friday Agreement’ presided over by the then Prime Minister of the UK, Tony Blair.

Coming down home, there have been loud cries for secession most notably by the Indigenous Peoples of Biafra (IPOB) and the Oduduwa Nation for the Igbos and Yorubas to break away from Nigeria on grounds of marginalization.

One factor which makes a secessionist attempt successful is the homogeneity of the people. The Confederates all spoke English and were bound by a common ancestry of their being immigrants from Europe into the New World. The Irish all spoke Irish and English.

The Igbos and Yorubas are not really homogenous. The languages have several dialects which makes easy communication a drag. Some of my Igbo friends for instance tell me that those from Ebonyi aren’t true Igbos because they share a boundary with Benue State. The Yorubas do not have a common ancestry or heritage. The Abeokuta man sees himself differently from the Ijebu man. There is even an agitation for the creation of an Ijebu State in Ogun State. The Ile Ife man sees himself differently from the Oyo man. We recall the rivalry between the late Ooni of Ife, Oba Okunade Sijuwade and the current Alaafin of Oyo, Oba Lamidi Adeyemi over the Crown supremacy. There is even discrimination among some Yorubas and Igbos with some marital plans squashed simply because some parents feel the spouse isn’t from a particular part of Igbo or Yoruba land.

The methods being employed by IPOB is even antithetical to their cause. Their shutting down of the economy in the name of a liberation struggle and identifying with their leader, Mazi Nnamdi Kanu is akin to cutting off one’s nose to spite your face. The headquarters of all companies in Nigeria are not in Igboland. They are mostly in Lagos with a few being in Abuja. Renowned Economist and APGA Gubernatorial Candidate, Professor Charles Chukwuma Soludo has opined that billions of naira is being lost by the South East economy during the shut downs. These companies especially the banks can simply relocate out of the south east on security grounds and life goes on. Who really loses at the end of the day? It will be the hoi polloi and even the elite based there as their economic bargaining power will take a gargantuan nosedive.

The stopping of the secondary school children writing the NECO examinations is highly condemnable. Why should they be made the fall guys of the struggle? These are innocent children who are trying to create a desirable future for themselves and help their families get out of poverty through the weapon of education.

The reality is that most Igbos based in the east obey the IPOB directive out of fear not because they really believe in the cause of the sincerity of Mazi Nnamdi Kanu. Many are pragmatic as most of their investments are based outside the south east and they stand to lose a great deal if the so called secession happens. We recall the abandoned properties saga which was prevalent in Lagos and Port Harcourt after the bloody nearly three year old civil war.

Oloye Sunday Igboho came to national consciousness when he expelled the murderous Fulani herdsmen from Igangan. He became an instant hero and important non state actor who filled in the lacuna by the defective state. Other states expectedly enlisted his services and he metamorphosed into a folk hero. Then he decided to expand his coast and stretch his luck a bit when he became the most visible foot soldier of the Yoruba secessionist agenda being powered by Professor Banji Akintoye. Many questioned his antecedents as an alleged former political thug to which he denied that he was a successful car dealer. The State expectedly crushed his spirit when they invaded his Soka residence, killed two of his comrades and intercepted his plan to flee to Germany on exile where one of his wives resides. He has seen been in Benin Republic where he has been battling an extradition attempt back to Nigeria to face a treason trial.

The critical question to ask is Are most Yorubas in support of the proposed Oduduwa Nation? Will the Oduduwa Nation solve the challenges of Yoruba people when as seen above they aren’t even homogenous?

Nigeria has over five hundred tribes – will the country break up into five hundred Sovereign nations in the name of fairness and justice? How will this break up happen? Through a war or referendum? Is it INEC that will manage the referendum? What about allegations of manipulation of the results? The attempted break up could be one whole messy process that nobody can currently envisage.

Historians recall the loss of about one million lives in the partitioning between India and Pakistan shortly after independence from Great Britain. Can we really afford another round of war-war? Why don’t we further jaw-jaw apologies to Winston Churchill?

Critical issues like restructuring and devolution of powers as well as fiscal federalism are issues that should be on the front burner for true peace and progress to return to the beleaguered nation rather than stoking the fire of ethnic hatred and fanning the embers of genocide. We can correct the ‘mistake’ of 1914 by coming together on a round table and discussing our differences as matured minds rather than another needless and futile round of bloodletting.

Let’s hope that the voice of reason prevails and we are able to adequately sort out our differences as challenges are part and parcel of human existence.