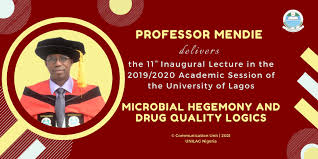 Professor Udoma Mendie of the Department of Pharmaceutics and Pharmaceutical Technology, Faculty of Pharmacy, delivered the eleventh Inaugural lecture in the 2019/2020 Academic Session of the University of Lagos on Wednesday, May 19, 2021 at the J. F. Ade Ajayi Auditorium, UNILAG, Akoka.

The Vent Republic learnt that the lecture entitled: MICROBIAL HEGEMONY AND DRUG QUALITY LOGISTICS, commenced by 4pm and was presided over by the Vice-Chancellor of the University, Professor Oluwatoyin T. Ogundipe.

The Inaugural Lecturer kicked off with the stance that “microorganisms were here for a purpose just like every creation made by God”. He asserted that they were “agents of decay and death and we often help them Marshall their attacks.” He described their attacks as “often insidious with no pre-warning signs except the nemesis of our assumptive yet perverse insanitary act.”

He further stated that “nearly any type of microbe and its attendant disease can be found in contaminated water.” He highlighted other important areas from sources of microbes with the assertion that “the house of water has many doors but that of purified water should contain no door”.

He spoke on other areas where microbial hegemony was prevalent, citing herbal medicines and the glaring flaws in its quality assessment. He also touched on Drug safety and Drug-Microbes interactions predominantly in areas of drug sourcing, production, storage , administration and environmental controls…. He decried the Community Pharmacy Practices. (Patent medicine) and (open drug Markets) as purveyor of ills.

The lecture was attended by a number of distinguished academics and students, as some joined the lecture virtually via zoom Video Communication