Nnamdi Kanu: What IPOB is doing to some of its members in Ghana 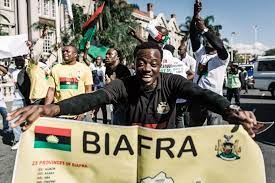 Indigenous People of Biafra (IPOB) has begun moves to secure the liberty of some of its members arrested in Ghana.

Aloy Ejimakor, one of the lawyers representing the leader of IPOB, Nnamdi Kanu, made this known in a tweet on Monday.

The Ghanaian police had arrested some members of the IPOB around Mallam Junction in Accra on Sunday while they were having their monthly meeting.

The lawyer noted that he had sent some documents that would fast track the release of the separatists.

“Update on #IPOB Ghana: A few days ago, I sent to the DOS (via @ChinasaNworu) certain legal documents critical to the defense of the faithful currently distressed in Ghana. The goal is to quickly secure their freedom and prevent their “rendition to injustices” in Nigeria,” he tweeted.

Nigerian officials had earlier extradited Nnamdi Kanu. The officials have said that Nnamdi Kanu was brought back after he jumped bail and went on the run in 2017.

His family and lawyers say he was illegally arrested in June while in Kenya, tortured, and flown back to Nigeria.

Separatist tensions have risen in southeast Nigeria, where a 1967 unilateral declaration of independence for a Biafra republic by Igbo army officers triggered a 30-month civil war that left many people dead.

The first secessionist movement after the civil war was led by Chief Ralph Uwazurike with his Movement for the Actualization of the Sovereign State of Biafra (MASSOB) which led to his arrest before his movement fizzled out.