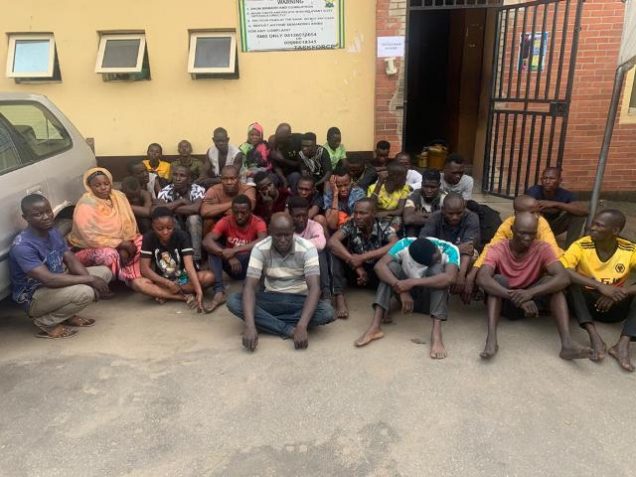 Landlords, landladies at Lagos bus stops, pedestrian bridges? Sounds unreal, false and weird. Is this true? Read on from the investigative report done by Tony Ademiluyi.

As you and I know landlords or landladies are house or real estate owners, one way or the other.

Big-time or otherwise, it either these house owners built their houses or bought them through a mortgage or paid a full cash deposit if they are wealthy.

In Lagos with a population of about 23 million people, it is the good, the bad and the ugly all the way, daily.

Investigations carried out by Ademiluyi in the last one month at various major and minor bus stops and pedestrian bridges in Lagos; reveal that poverty, frustration, joblessness and the depressed economy have forced some people to become landlords and landladies at these odd places.

Media reports have it that the officers caught the suspects in the act of unleashing mayhem and molesting commuters and passengers along the expressway during odd hours in the morning and night.

However, when some of the arrested suspects kicked, the Chairman of the Lagos State Taskforce, Shola Jejeloye, a Chief Superintendent of police, who moved to maintain law and order as well as listen to some of the aggrieved protesters called for calm that government would address their grievances.

Jejeloye was quoted as saying that his agency was presently restructuring its operations in order to prevent reported incidences of illegal taskforce operatives in the metropolis.

He said he had listened to all complaints against the officials of the agency, noting that genuine complaints would be addressed.

In July this year, Lagos police commissioner, Hakeem Odumosu,  told the world that 1320 suspected miscreants were arrested in various parts of Lagos from May 1 to July 13, this year.

According to Odumosu, this is even as a total of 1966 cases were tackled by the police in Lagos during the period under review.

The Lagos CP in his speech before parading the suspects arrested added that 88 bags of Indian hemp, valued at over N10million were also seized, while 151 cases were charged to court by the police.

Arms recovered stood at 110, while ammunition was 125, as 72 suspected cultists were arrested in four cases reported to the police from May to mid-July.

No vehicle was snatched as the police said it recovered 8 vehicles, while no single person was kidnapped in Lagos in the last three months.

This is where the story seems to end. Our investigations revealed that despite the efforts of the Lagos State Government and the Police Command in the former capital of Nigeria, with an ever-growing population, hoodlums, area boys, area girls, nocturnal harlots, commercial drivers and conductors, agberos, criminals, beggars, etc, now make busstops, pedestrian bridges as their permanent homes.

Oshodi bus-stop in Lagos is popular because one could connect anywhere in Lagos from the busstops.

But, mostly at night and during the day, suspected criminals do position themselves along the railway tracks, near Arena, the BRT terminals, the market areas, as well as the pedestrian bridges to harass people to rob them of their belongings.

Last week Wednesday, our under-cover reporter at about 11.30 pm approached a police officer on Rapid Response Squad beat to beg for a place to sleep at the busstop, on the excuse of being stranded, coming all the way from Ifo, Ogun State, at such odd hours.

The RRS officer simply asked our reporter to move into the cubicle donated to the police by Mikano Company Limited, placed near Oshiodi under-bridge at the junction linking Lagos-Abeokuta expressway to Lagos-Apapa expressway.

When our reporter went on patrol, so to say at about 1.45 am, a large number of suspected miscreants were spotted sleeping on the railway track, at some of the open stalls around Brown Street market, around the BRT terminals and atop the pedestrian bridges.

Emeka Chukwuma, a fairly-used clothes trader at Brown street market unknowingly told our reporter that most of the suspected miscreant sleeping around Oshiodi bus-stops and pedestrian bridges do pay between N50-N200 depending on their bargaining power and the mood of the leaders assigned to head some of the sleeping points.

Investigations also revealed most commercial bus drivers plying various routes in Lagos, as well as those travelling to other states and neighboring countries Like: Ghana, Togo, Cotonu, etc, do sleep at the back of the BRT, after the BRT buses have arrived the terminals and the place is locked from about 10.00 pm, daily.

At the pedestrian bridge at Bolade bus-stop in Oshiodi, our reporter spotted three hoodlums having sex on top of the bridge at about 2.13 am.

But, while some beggars at most of the pedestrian bridges help to sweep the bridges while begging for money, the miscreants were observed loitering around the bridges smoking Indian hemp, talking tough and harassing people returning to their homes late.

Though the Lagos Taskforce office is a stone throw from the busstop, suspected hoodlums do have a field day robbing people of  their phones, cash and other personal items during odd hours.

At Cele busstop and the pedestrian bridge along Lagos-Apapa expressway, traders, beggars and miscreants, are jostling daily for spaces. While the beggars sweep the bridge while begging for alms, the traders, dealing in all sort of wares sell their goods, even as miscreants, gather in groups to talk, possibly plan their next moves and smoke Indian hemp.

But, our investigations further revealed that around Maryland bus stop in Lagos, most of the people who sleep around the BRT bus stops are the elderly, homeless, frustrated, or jobless persons.

Mama Urhobo is a popular petty trader at the Oshodi bus stop, whose business point is located opposite Wema Bank. She sells all sorts of wares from ogogoro or local gin to cigarettes, biscuits, alcoholic drinks, herbal drinks, soft drinks etc.

It was revealed that the likes of harlots, area boys, homeless persons, night travellers, police officers, under-cover intelligence officers, etc, do storm her selling points, daily at night and stay put till the following day.

The woman boasted on Friday night that having worked in various companies; she moved to start her petty business from the loan she got from a microfinance bank.

But, it appeared most dwellers at various bus stops and pedestrians do have an insight with the operations of the Lagos Taskforce and the police, who have commenced the raining of various busstops and real or perceived criminal hideouts in Lagos, in the name of ember months raiding.

Last week Friday, Task force officials were disappointed when they arrived Maryland bus stop from the Mobolaji Bank Anthony end of Ikeja at the dead of the night to raid the entire BRT busstops vacated by those landlords and landladies at Onigbongbo and Various busstops along the route.

However, our reporter, who was on the trail of the officials observed that lots of persons, suspected for one reason or the other were arrested and bundled into their mobile prison called a van.