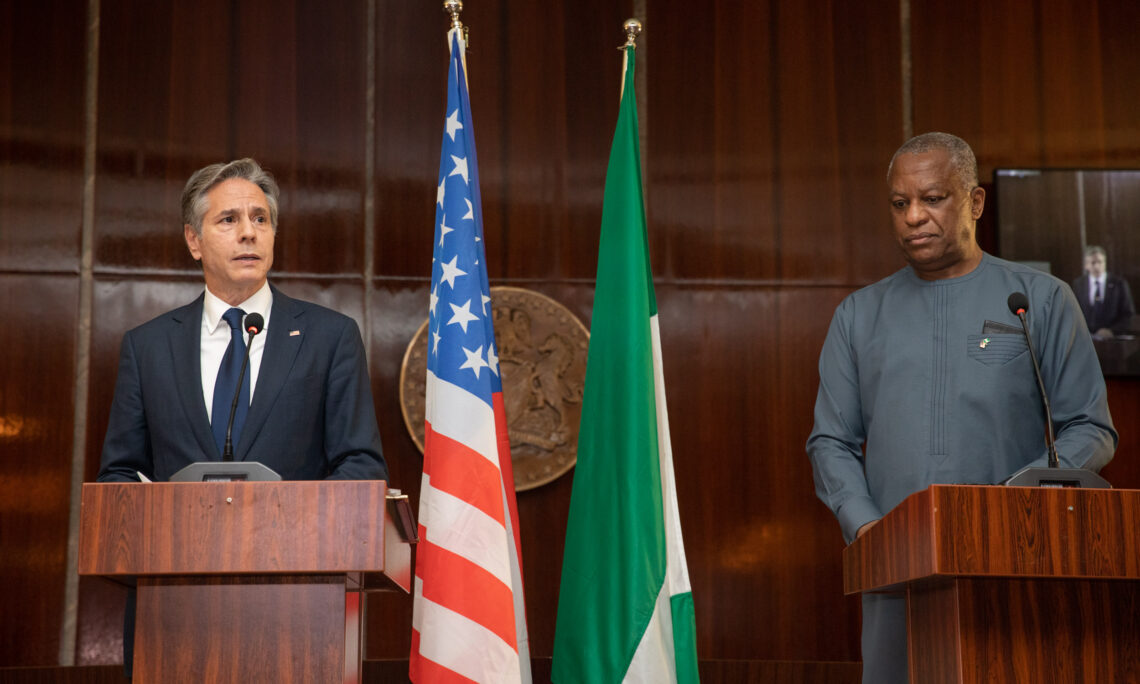 The United States Secretary of State, Antony Blinken, has said America is keenly waiting for the federal and Lagos State governments to take action on the report of the judicial panel of inquiry, which probed the alleged killing of #EndSARS protesters by soldiers and policemen on the night of October 20, 2020 at the Lekki toll gate in Lagos.

Affirming the widespread description of the Lekki toll gate incident as a massacre, the panel, in its report, declared at least nine persons were killed by security agents at the toll gate.

The panel report listed 48 names as casualties of the Lekki incident out of which 22 protesters sustained gunshot injuries, while 15 others were assaulted by soldiers and police.

The panel said, “The atrocious maiming and killing of unarmed, helpless and unresisting protesters, while sitting on the floor and waving their Nigerian flags, while singing the National Anthem can be equated to a ‘massacre’ in context.”

The report added: “From the evidence of General Taiwo on pages 6, 7, 21, 22, the panel finds that both blank and live bullets were fired by the Nigerian Army at the Lekki toll gate on October 20, 2020, for the following reasons:

“Apart from the military men in uniform, the Army left its base with vehicles, rifles and guns, which contained both live and blank bullets. General Taiwo admitted at page 22 that the Army went to the Lekki Toll Gate with live ammunition.

“As of October 30, 2020, when the panel visited the Lekki Toll Gate for its on-the-spot assessment, it was still able to recover two bullets shells which were duly analysed by the forensic expert hired by the panel, Sentinel, who is very familiar with weapons used by the Nigerian Army.

“These bullet shells were said to be the same as or similar to the ones normally used by the Nigerian Army and they were expended shells, meaning they were fired live at the Lekki toll gate.

“Petitioners and witnesses appeared before the panel to give vivid accounts of shootings by the Army into the crowd of protesters. The panel finds their testimonies credible being eyewitnesses’ accounts and would ascribe probative value to their testimony over that of General Taiwo who was not physically present at the Lekki Toll Gate.

“The panel finds as credible, the case of the #EndSARS protesters that soldiers shot directly at protesters at the Lekki toll gate on October 20, 2020 as confirmed by Lagos State Ballistic expert, Willie-Harry, on page 244 that some video evidence indicate ‘… instances where troops were seen to be re-arming their weapons before either discharging them to the air or purposely in the direction of the protesters …’

Based on the findings, the panel recommended, among others, “disciplinary actions against the following officers – Lt. Col S.O. Bello and Major General Godwin Umelo, who refused to honour the summons of the panel in order to frustrate the investigation.”

It added: “All officers (excluding Major General Omata) and men of the Nigerian Army that were deployed to the Lekki Toll Gate on October 20, 2020 should be made to face appropriate disciplinary action, stripped of their status, and dismissed as they are not fit and proper to serve in any public or security service of the nation.

After receiving the panel’s report on Monday, Governor Babajide Sanwo-Olu of Lagos State set up a four-man committee to come up with a white paper on the report in a fortnight.

Sanwo-Olu assured Nigerians that the government’s action would be guided by the law and in the public interest.

He expressed hope that the government’s decision on the reports would bring complete healing, reconciliation and restitution to the victims.

During a meeting with the President, Major General Muhammadu Buhari (retd.), on Thursday in Aso Rock, Abuja, the US Secretary of State, Blinken, had said America “anticipate and look to the state and the Federal Government’s response to the findings, and expect those to include steps that ensure accountability and address the grievances of the victims and their families.”

On Friday, the US Secretary of State met with members of the civil society in Abuja, reiterating that the US’s demand for justice.

Blinken told the CSOs: “We saw the conclusion this week of the independent Lagos State Judicial Panel of Inquiry’s work and the transmission of its final report. And this is clearly an important step toward accountability for the killings and other abuses alleged to have been committed by security forces during the EndSARS protests, a year ago.

“So, we’re very much looking forward to the Federal Government and the Lagos State Government and other state governments taking measures to address the alleged abuses, as well as the grievances of victims and their families.

“Reports are critical, but what counts as much and even more is whether there’s action that follows those reports.”

Meanwhile, a petition by Reno Omokri, a former Special Assistant to President Goodluck Jonathan, on the change.org platform received 76,420 signatures on Friday.

The petition, which was filed on Wednesday, was directed at the International Criminal Court and comes after the Lagos #EndSARS panel indicted the Buhari administration in its report.

At over 75,471 signatures, the petition is the first of Nigerian origin to hit that number in two days.

The petition is titled, ‘A Petition to The International Criminal Court to Arraign Muhammadu Buhari for Crimes Against Humanity’.

The petition sought to have Buhari tried and imprisoned by the International Criminal Court for crimes against humanity believed to have happened at Lekki tollgate on October 20, 2020.

Omokri wrote in the petition: “Following the murders of these protesters, the Buhari administration denied that the incident ever occurred. They threatened those, like myself, who insisted, with proof, that this massacre happened. The government even threatened to jail people who called for those behind the murders to be brought to book.”

A close look at the report by the panel of inquiry revealed that 51 persons died from “gunshot injuries from rifled weapon,” during last year’s #EndSARS protest in Lagos State.

The victims’ corpses were among a total of 99 corpses picked up from various locations in the state.

The testimony of the forensic pathologist from the Lagos State University Teaching Hospital, Prof. John Obafunwa, was documented in the panel report, spanning through pages 75 to 109 pages of the report.

Obafunwa gave the cause of death of each of the 99 corpses he conducted autopsies on.

He gave the cause of death of 51 of them as “gunshot injuries from rifled weapon.”

However, he said the corpses presented to him were brought from various locations such as the Lekki toll gate, police stations, correctional centres, general hospitals and other parts of the state.

Obafunwa, in his testimony, said out of the 51 corpses that died from “rifled gunshots,” eight were brought from Ikotun Police Station, three from Olosan and Denton police stations each, one from Ifako  police station; 19 from Ikoyi Prisons, one from Lekki toll gate and one from Anisere in Ojota.

The locations where three of the bodies were brought from were not stated while names of 36 victims were unknown. In some cases, names of cops who deposited bodies in mortuaries were not known.

Aside from the 51 bodies, about four victims were said to have died from shotgun wounds – commonly wielded by hoodlums – with pellets recovered from the corpses while others died of other injuries.

Obafunwa explained that there were two broad classifications of gunshot injuries, noting that where “a handgun or rifle is used, a bullet is expected to be discharged from it; as opposed to a shotgun which releases pellets.”

He clarified that guns that discharged pellets were not “typically seen to or used” by law enforcement agencies, adding that “security agencies are automatically ruled out of being responsible for the death of a person where examination of the injury reveals that the victim was shot by a gun that fires pellets.”

Although the pathologist did not mention the class of guns security agents usually bear, the National President, National Association of Criminologists and Security Practitioners of Nigeria, Williams Ekposon, said they are constitutionally empowered to carry rifles.

He stated, “By virtue of the Constitution and the Law Enforcement Act, rifles are meant for those that secure the state. Security is in the hands of the government. Security agents are meant to carry rifles for the purpose of defence. Proliferation of arms has given some criminals access to rifles.”

Drawing its conclusion on Obafunwa’s testimony, the panel said, “The fact of lack of identity of some of the other 96 corpses on the list supplied by Professor Obafunwa would not obliterate the fact that some of them could have come from the Lekki Toll Gate incident of October 20, 2020 or that some other unidentified corpses may have been removed by their families or the military, as claimed by the #EndSARS protesters, far and beyond the list tendered by Professor Obafunwa.”