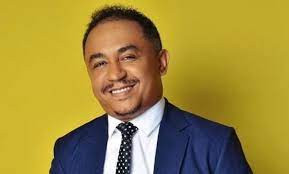 Controversial OAP Daddy Freeze has responded to a Christian lady who blasted Nigerians for donating money out to Davido but always complain when the Christian gift their pastors’ money or material items.

The lady had tweeted:

”Davido posted his account number and y’all have been sending him money, but if it was a pastor agenda will start agending..

DaddyFreeze who has always been critical about pastors responded to her tweet. In a post shared on his Instagram page, Freeze opined that it is the manner in which pastors collect money from their members that gets to him. His wrote;

”There is absolutely nothing wrong with giving a pastor money, even if he wants to clear a Rolls Royce like Davido.

It’s what the pastor says to obtain the money that I have issues with. Many would say that you won’t make heaven if you don’t give them money, or when you give them you are giving to God, or even tie your blessings to giving them money, that’s where I have a problem.”

Daddy Freeze is widely known for his criticism of the lavish lifestyle of Nigerian pastors which led to his founding of the ‘Free the Sheepie Movement.’ He was once linked to Hushpuppi whom he met on a Dubai trip.