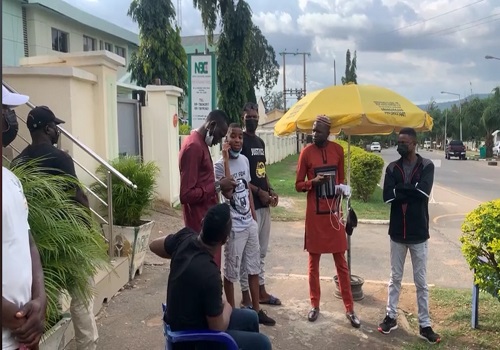 The Publisher of Sahara Reporters, Omoyele Sowore and other activists stormed the premises of the National Broadcasting Commission (NBC) over the query it issued to Channels Television.

The Vent Republic had earlier reported that the NBC queried Channels TV over a query it issued to Channels over an interview it granted to Benue State Governor, Samuel Ortom.

In the live update monitored by The Vent Republic,  Sowore who adorned a black top with “Justice” written boldly on it with other activists, stood at the entrance of the commission’s office.

Some members of staff of the commission seen leaving the premises of the agency queried the presence of Sowore and others at the entrance.

They also cautioned them to stop recording, stating it was prohibited.

But Sowore responded: “We are here because of channels TV, we are on solidarity with them”.

Some other members of staff of the Commission were seeing hurriedly leaving the premises.