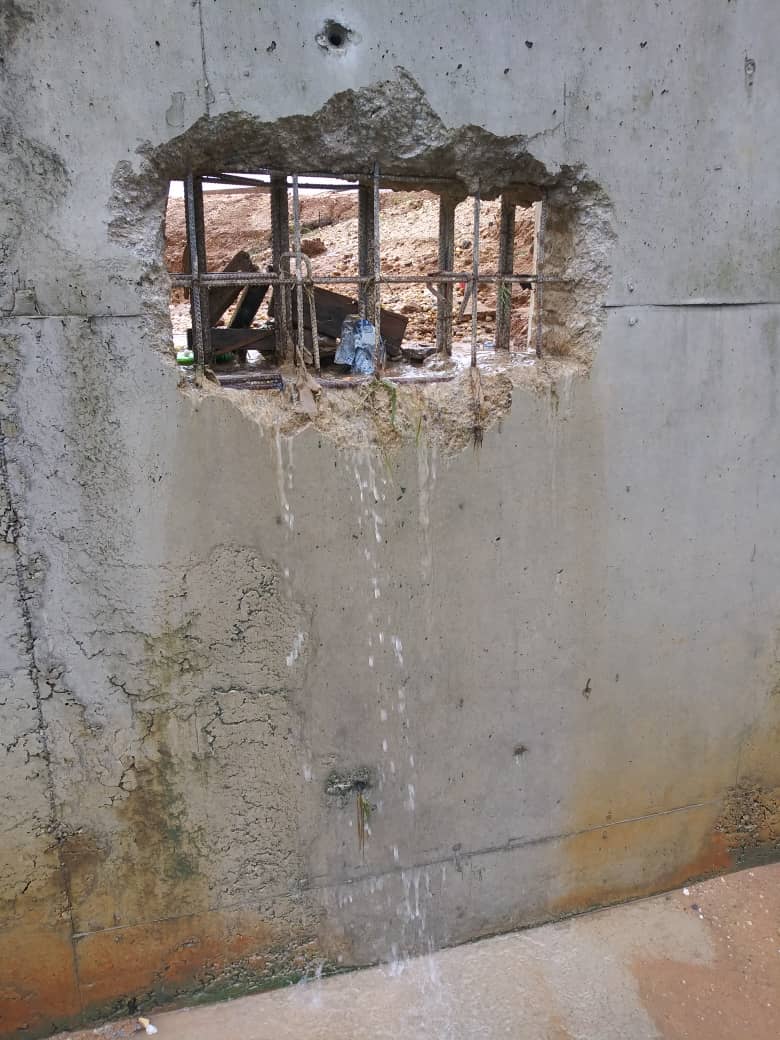 …Residents lament channeling of flood into their homes by Julius Berger

While the Government of Akwa Ibom State continues to receive national and global accolades on the ongoing construction of the International Worship Centre, residents of Afaha Ikot Obio Nkan in Ibesikpo Asutan, the community where the worship centre is sited, are counting their losses and wishing the edifice never came to their environment.

Situated behind the renowned banking layout, off Udo Udoma Avenue in Uyo, the International Worship Centre has become an unbearable pain in the neck of the host community whose houses and roads have turned ponds and mini-streams as a result of the Altar’s flood channel which empties the entire flood from the four-corners of the Worship Centre into surrounding houses and farmlands.

Even more, the access roads to the community, walk paths and bush tracks have all become waterlogged and completely overtaken by heavy flooding thus, making it impossible for pedestrian and vehicular movement as well as a domiciliary environment for reptiles and other creeping things.

Worsened by the constant downpour of rain in the last few weeks, residents of the area have had to live in perpetual fear of being drowned or their properties being irreparably destroyed by the increasing flood water pouring out from an outlet behind the construction site.

When our reporter visited the serene environment which has now become a River, a sorry site presented itself as every affected resident had a sad story to tell about the harsh effect of the flood on them. Farmlands and buildings were all submerged in the stagnant flood and people had a turbulent time wading through the waters to get to the tarred road, while others were permanently trapped in their houses.

Upon inspection, it was discovered that the facility under construction had several flood channels facing the community but closed up some and left a very large one open to dispense all the flood water within it. The flow, like a waterfall is turbulent and heavy, and continues without end up until the entire flood is drained out of the facility, 24 hours later. As such, the waters which quickly spread its weight into the community only starts receding when its source stops flowing.

Safe for their fences, some houses would have been conquered by the forceful torrent of the flood which has left its inhabitants helpless as well as defenseless. Yet, majority of houses behind the International Worship Centre have had their living rooms, bedrooms, kitchen, cars and gadgets flooded without mercy for three years.

Narrating his flood-imposed ordeal to this reporter, one of the House Owners in the area, Mr Emmanuel Edem told THE INK that their living condition changed for the worse when the construction company handling the Worship Centre, Julius Berger, made the community its flood channel.

“This has been happening since 2018. When it rains, we experience this mess. Water used to flow through the gutters by the tarred road before, but since the commencement of this project by Julius Berger, they left the gutters and channeled all the water to our community. The last time the flood came, my car engine and that of my wife were completely knocked down, while our furniture, mattresses and other household gadgets were watered down beyond repair”, he expressed.

Informing that he has made several attempts to draw the attention of Julius Berger and the State Government to the eyesore, the retired public servant notified that none of his civil attempts yielded any result.

“My Lawyer wrote a letter to the Company (Julius Berger), intimating them of this issue as well as the State Government who contracted them. The Deputy Governor, Mr. Moses Ekpo only promised to send someone to come and see the extent of damage done but nobody has come till date. Then my Lawyer took the case to Court but they came and said that it is not the company that is causing the flood and that this place used to be a River. I want to state categorically that this particular area has never been a River but a farmland. I am from this community and this is my ancestral home. There is no such record of a River ever being here. Meanwhile, they came and blocked some of the outlets they created and left just one open, which is now the major flood channel into our community”, he explained.

“We have no access road and instead of thinking of giving us one as a social responsibility, they have destroyed the paths we created to help ourselves to the tarred road. We can no longer farm. Look at our houses; we would have relocated a long time ago if we were tenants as some tenants have already done; but what do we do in this case? Why should an acclaimed gospel centre cause us this height of pain? he lamented.

Buttressing the stance of Mr. Edem, another member of the community decried the height of wickedness and insensitivity to the plight of the people by the construction firm, Julius Berger and the State Government since 2018.

“What you’re seeing now is still the flow from the rain which fell 12 hours ago. If you come here when it is heavily raining or seconds after a heavy rainfall, you’ll get a clearer picture of what we’re are passing through. When it rains heavily at night, we don’t sleep; I gather my family and put my children on the dining table while my wife and I will spend the rest of the night leaning on the table with the water above our knees”, he told this reporter.

“We had peace and sound mind before the citing of this project but all of that left us since 2018. Our only hope now is God, through the dry season but that is still very far away”, he grieved.

Meanwhile, few House owners in the area have threatened to make trouble if the flood collapses their House.

“My House is only being protected by that fence which is already soaked. All of the water standing outside would have found its way into my House without it so, if that fence falls eventually, the government will not like our reaction at all. They should come and do the needful before they will say we took laws into our hands”, Mr. Edem appealed.