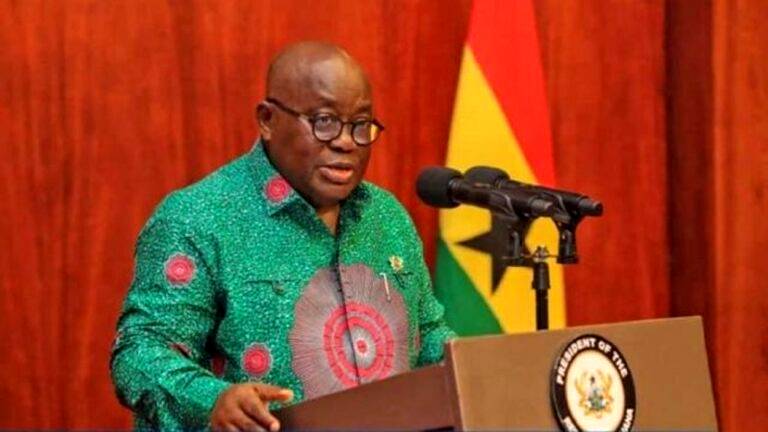 President Nana Akufo-Addo, President of the Republic of Ghana, says food now consumes about 40 per cent of income in African households.Akufo-Addo said this at the 2022 annual meetings of the African Development Bank (AfDB) for Heads of statesHe said the percentage was higher when compared with less than 20 per cent of income spent on food by households in advanced economies.Akufo-Addo attributed the development to the rising food prices caused by the Russia invasion of Ukraine which compounded the emerging socio-economic vulnerabilities.

Since February, prices of staple food commodities have surged drastically. Energy markets have been significantly volatile, with dire consequences for households and public finances.“The immediate economic consequences whether in the form of rising inflation, lower growth, increased inequality and greater financial instability are likely to permeate deeper. The debt challenges are compounding for us in Africa.

According to UNECA, the debt to GDP ratio rose from 60 per cent to an estimated 71.1 per cent between 2019 and 2020, largely because of the COVID-19 pandemic.“At this moment, support for non-IMF programme countries to alleviate the debt burden is limited.“The initial facility designed to offer respite to economies with elevated debt challenges, the Debt Service Suspension Initiative (DSSI), has expired since December 2021.

In these trying times, the IMF $650 billion Special Drawing Rights (SDR), approved in August 2021, was meant to be of significant relief.

“However, based on the allocation principles, economies on this continent got $33 billion about five per cent.

“Moreover, the promise to reallocate some $100 billion of the SDR allocations to our economies, which was agreed to at the Paris Summit in 2019, has so far yielded about $36 billion in pledges as of April 2022.

“The strategic decision to make the AfDB the delivery vehicle for these SDRs must be pursued and achieved,’’ he said. Akufo-Addo advised African leaders to ensure that the remaining 85 per cent of the continent’s population were vaccinated against COVID-19 and 60 per cent of health facilities in the continent were connected to reliable sources of electricity. He also called on the leaders to ensure that the teeming youths were better educated and digitally enabled.

Other pleas were to ensure that the African Continental Free Trade Area (AfCFTA) agreement transformed the continent with combined GDP of $3.3 trillion and the unrelenting insecurity and violence; creating about 2.5 million internally displaced persons were addressed.

Mr Ken Ofori-Atta, the Chairperson of the AfDB Boards of Governors, said the balance sheet of the African Development Fund (ADF) must be leveraged to raise additional capital for the continent. (NAN)