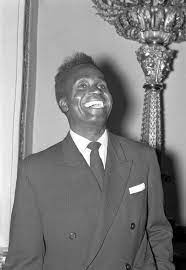 The industrial revolution of the 19th century was one of the immediate causes of the abolition of slavery as the factory owners in Europe especially in Great Britain where it originated from needed a gargantuan market for their goods. Africa was the new frontier and so it made a whole lot of sense for slavery to be outlawed so that the inhabitants of the continent would have some economic clout to purchase the excess goods from Europe.

The 20th century was also the age of the decolonization of Africa by many African nationalists who had studied abroad and were eager to export democratic ideals to their respective countries. Many were killed, maimed, jailed and exiled for their beliefs by the colonial overlords but they stood sturdily firm in their determination to rid the continent of the sinister yoke of colonialism despite the humiliations they suffered for the cause.

Kenneth David Kaunda fondly called KK was one such African nationalist who stood up to be counted.

His parents from the Bemba ethnic group were both teachers with his mother being the first female to teach in the then colonial Zambia. The last born of the family, he must have been influenced to become a teacher by his parents. Like many African nationalists, he was trained by the missionaries – in his case the Scottish missionaries. Ghana’s Osagyefo Kwame Nkrumah and Zimbabwe’s Robert Gabriel Mugabe were trained by the Roman-Catholic Church.

Kaunda taught not only in his native Zambia but also in Tanzania and the then Southern Rhodesia now Zimbabwe. While a teacher he read the works of the Indian Nationalist, Mahatma Ghandi which he said in a later interview had a profound influence on him.

At barely 25 in 1949, he joined partisan politics when he became a founding member of the Northern Rhodesian African National Congress. In 1953, he moved to Lusaka where he became the Secretary-General of the African National Congress under the Presidency of Harry Nkumbula. In 1955, he was incarcerated for the first time when he and Nkumbula spent two months behind bars for distributing subversive literature to the people. The two leaders fell out as Nkumbula became influenced by Caucasian liberals and wasn’t militant in his approach in the demand for total emancipation of Zambia from the British.

This led Kaunda to founding the Zambian African National Congress (ZANC) in 1958. ZANC was banned in 1959 and he was jailed for nine months for his nationalistic activities.

Mainza Chona and some other nationalists broke away from the ZANC and formed United National Independence Party (UNIP) and Kaunda was elected its President in 1960 upon his release from detention. In 1961 he visited Martin Luther King Jr in Atlanta and introduced civil disobedience in his campaigns for the liberation of Zambia which included arson and blocking significant roads.

Zambia became independent in 1964 and he was elected its first President.

As a former teacher, he was concerned about the poor state of education in the country left by the departed British. He ensured that there was massive government subsidy of education which saw a monumental increase of students’ enrollment at all levels.

The economy was rather vibrant at independence largely on account of its vast mineral deposits. However, his economic policies were hugely disastrous which greatly impoverished many Zambians. Despite possessing some of the finest farmlands in Africa, he decided to adopt socialist measures to farming in the country patterned after what Mwalimu Julius Nyerere did in Tanzania with results that were heavily disastrous. In 1973 there was falling prices in oil and copper which led to a massive reduction in the income from the nationalized mines. He then decided to implement an advice from the Bretton Woods Institutions – the World Bank and International Monetary Fund (IMF) by devaluing the local currency – the Kwacha in the 1980’s. In 1990, he was forced to privatize some government owned corporations which didn’t sit well with the majority of the Zambian populace.

He was rather dictatorial as he banned all political parties with the exception of his UNIP in the country in 1968 following a violent outbreak after the elections. He created a personality cult with extremely weak institutions typical of many of his fellow African leaders who preferred strong men to sturdy institutions.

He opposed apartheid in South Africa and expressed his support for Nelson Mandela who was then the world’s most famous prisoner as well as vehemently opposed white minority rule in the then Rhodesia and aligned with Robert Mugabe during his decade long incarceration. During the Cold War, he aligned himself with the Non Aligned Movement and served as its Chairman between 1970 and 1973. He was also a firm believer in Africa’s unity as espoused by Kwame Nkrumah and played a key role in the establishment of the Organization of African Unity now African Union serving as its Chairmen from 1970 to 1971 and then from 1987 to 1988.

In 1991, he narrowly survived a coup attempt as riots broke out in the country over the need for a multi party system as majority of Zambians were tired of his one party dictatorship. This made him allow many parties which led to the formation of the Movement for Multiparty Democracy (MMD) led by former trade unionist, Frederick Chiluba which swept UNIP from power by a landslide.

He clashed with the Chiluba Presidency and he was declared a Malawian to prevent him from contesting the 1996 presidency. A court later declared him as stateless after an unsuccessful attempt to deport him to Malawi but he overcame the challenges.

He suffered the double tragedy of losing two of his sons – one to HIV/AIDS in 1986. This made him take more than a passing interest in the fight against HIV/AIDS with global recognition for his efforts.

He was a prolific writer and his published books include Dominion Status for Central Africa, Zamia shall be free, Zambia, Independence and Beyond: The Speeches of Kenneth Kaunda, A humanist in Africa: Letters to Collin M. Morris from Kenneth D. Kaunda, The humanist outlook, Humanism in Zambia, The Riddle of Violence, Kaunda on Violence.

Despite his flaws which have caused him to be one of Africa’s most controversial former leaders, he was a great son of Africa and we are glad that he lived to the ripe old age of 97.

May his soul rest in peace and may posterity judge him kindly!