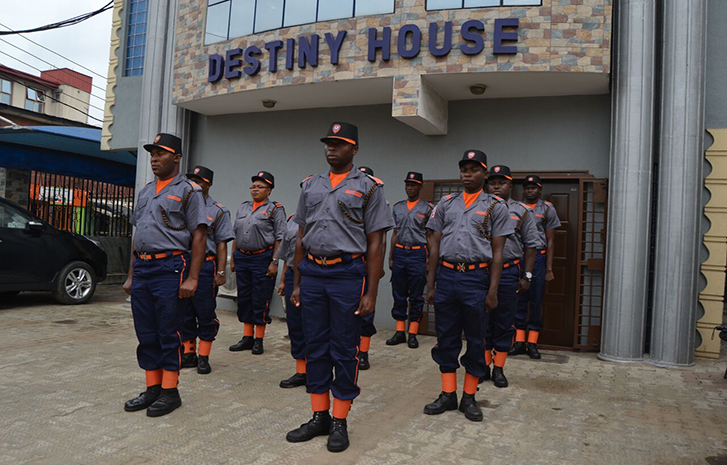 It is noted that all over the world, security business is deadly, risky, slippery, dangerous and sophisticated.

Like in other business concerns, owners of registered and yet-to-be-registered private security companies are in for raw deals.

They are driven by profits, the laws of supply and demand and the desperate hustle for big, juicy contracts, our investigations have shown.

Private contract security companies hire all sorts of people, give them one or two weeks crash training courses and hire them out to man beats and locations, nationwide.

With unemployment figures hitting the roof in Nigeria, there are an estimated 5 million contract security guards in our country.

Others are: Transworld, Mega Guards, G4S, Zoomlens, Evergreen, Kind David and Sherperdhill. Some of these companies have national and international spread and operations.

Afolabi, an HND holder from Auchi Polythenic in Edo State, confessed that he roamed the streets of Lagos, wrote series of application letters in search of job, after his graduation five years ago, but was not hired by any company.

His words:”I read marketing and was forced through frustrations to accept to guard an eatery as a contract security guard, earning N20, 000 every month”

The polytechnic graduate, married with three children and living in face-me-I-face-you apartment somewhere in Ilupeju, Lagos, has been on a 12-hour beat at the eatery for six months, earning slave wages as salary without insurance policy in place for him.

Miss Patience Okon, an indigene of Akpabuyo in Cross River State is a WAEC holder. She earns N15, 000 monthly contracted to guard a motor company, located along Lagos-Apapa expressway.

Okon is lucky as she is residing with her parents around Okota area in Lagos. She is not paying house rent and presently has nobody to feed, our under-cover investigations revealed.

Findings showed that for anybody to be hired as a contract private security guard, the person must know how to read and write.

At King David Security Academy, located at Shogunle in Ikeja, Lagos, Mr Alex the Training Officer, told applicants undergoing a one-week training recently that anyone could be hired as a private security guard, provided the person can read and write

According to him, “The academy, a training arm of Kind David Security Limited, Lagos, teaches people how to write take over and handover reports as well as situation or observation reports, when hired daily”.

It is therefore a welcome development to note that today, there are graduates of tertiary institutions trained and hired as contract private security guards all over the country.

The late Chairman/CEO of Phahek Security Company, Lagos, Dr Patrick Keku, once said that there are about 5million private security guards in Nigeria, assisting government at various levels to tackle criminalities from all fronts.

Security Operational Procedure, SOP, is the global handout for the training of private security guards to protect the lives and properties of individuals, corporate bodies, groups, states, or nations, etc, from threats and risks of all kind.

However, our investigative journalist, who joined the training class for two weeks of a private security company in Lagos, observed that SOP dwelled on definition of security, access control, dog management, gates management, sanctions, rewards, liabilities, terms and conditions for private security officers, neatness and punctuality, among others for intending private security guards.

After the training, an employment form which contain: personal-bio-data-form, containing two forms to be filled by his or her  guarantors is issued with the instruction  to fill and return the form with his  or her CV, six passport photographs, a formal application letter, and photocopies of the person’s  credentials and certificates.

Gbenga Komolafe, General-Secretary, Federation of Informal Workers of Nigeria, FIWON, is running a cooperative society for workers in the informal sectors of our economy.

Komolafe, an activist said private security guards should key into his scheme to save their future from doom, through saving a portion of their income, daily, weekly or monthly as the case may be.

There are no retirement benefits or gratuity for most contract private security guards in Nigeria, he said.

But, Richard Amuwa, CEO, Mega Guards said contract ratio is always: 70: 30. Meaning for every contract the guard gets 70 percent, while the contracting security company gets 30 percent.

But, as some private contract security guards said in Lagos, Abuja, Port Harcourt, Kano, Borno, some private security company owners may not be telling the truth, as they alleged that the reverse seems to be the case.

When you are hired by a private security company, you will be issued with fanciful uniforms, booths, caps, and other items and the cost will be deducted from your salary from the very month you start work, some guards lamented, he said.

It is noted that the Nigeria Security and Civil Defence Corps, NSCDC, supervised by the Ministry of interior regulates the operation, training and other activities of registered private security companies operating in Nigeria.

But, NSCDC and the interior ministry seem to be helpless when it comes to regulating the slave wages code-name monthly salaries that are paid to guards.

But, Seun Abolurin, Lagos NSCDC spokesman said the corps only regulates private security companies, not payments to their officers.

Finings revealed that at locations, the commander and chief security officer, reeled out the rules-coming to work before 6.30 am, indecent dressing, refusal to polish his booth, failure in identifications and documentations, sleeping, or eating while on duty, etc, attracts debits at the end of the month. Meaning, the meager salaries of the officers were being threatened.

It was also noted that if a pin is stolen while on duty, the entire security team could be the first in the line of suspects and police could be called in for arrest, investigations and the matter charged to court in preparation for prison.

However, the angle that broke the Carmel’s back was when this writer was told point-blank that despite his ‘intimidating qualifications’ and considering the fact that the basic qualification for private security officer is the ability to read and write, N22,000 was to be paid as his monthly salary.

A private security company could quote N50, 000 per guide to their clients, the guide assigned to the location ought to be paid N35, 000.