Skip to content
Trending
Another Year: Chronicle Of My Journalism Life
The Global Journo: My Journey to BBC
Unilorin Final Year Week: It Is Not Bye Bye, But See You Again.
Aside Trying To Induce Me With Money, Jonathan Tried To Make Me Join His Government — Omoyele Sowore
Alleged Billionaire Murder: Chidinma Ojukwu booked the apartment where he was murdered using a false name
BREAKING: Aisha Alhassan (Mama Taraba), Is Dead
Members Still In Disbelief Over The Death Of Prophet TB Joshua.
Opinion: Food Insecurity in Nigeria: Way Forward – Precious Ewuji
PANDEF blasts Lawan insists that Presidency must come to the south
How to Solve – Can’t Add New Plugin Issue in WordPress
Home » Gas tanker explodes in Ikeja 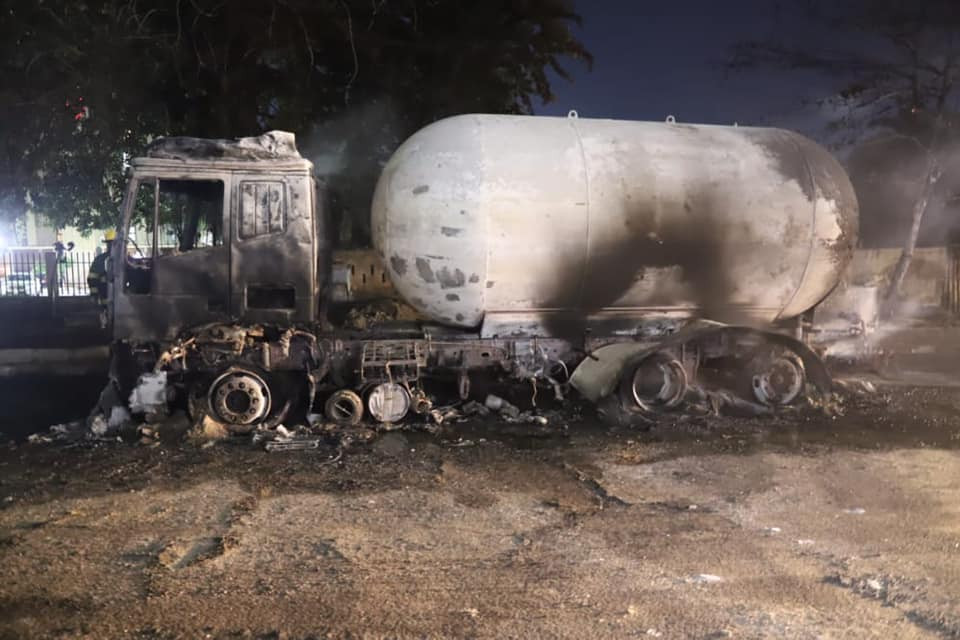 An eyewitness alleged that the fire was caused by a leaking gas tanker that broke down just after a Filling station, causing panic at the filling station and making both staff and customers flee for their lives.

The fire was caused by a leaking gas tanker that broke down just after Total Filling station at around 10:30pm causing panic at the filling station that made both staff and customers flee for their lives.

Repeated calls to the Lagos state fire service for preemptive measures proved abortive until the tanker exploded at about 11:PM and the resulting inferno quickly spread around, especially into the plaza after the filling station.

A gallant effort from the Lagos state fire service when did arrive curtailed the rage of the fire and arguably prevented further damage.

Some people sustained injuries and many buildings as well as vehicles were affected.

One thought on “Gas tanker explodes in Ikeja”