Skip to content
Trending
Opinion: Food Insecurity in Nigeria: Way Forward – Precious Ewuji
Alleged Billionaire Murder: Chidinma Ojukwu booked the apartment where he was murdered using a false name
Members Still In Disbelief Over The Death Of Prophet TB Joshua.
Another Year: Chronicle Of My Journalism Life
The Global Journo: My Journey to BBC
IPOB denies plans to attack Lagos
Unilorin Final Year Week: It Is Not Bye Bye, But See You Again.
Aside Trying To Induce Me With Money, Jonathan Tried To Make Me Join His Government — Omoyele Sowore
Gospel Singer Heben Ajayi Dies Few Days To His Wedding
BREAKING: Aisha Alhassan (Mama Taraba), Is Dead
Home » What to Know About the New Lagos-Ibadan Train

What to Know About the New Lagos-Ibadan Train 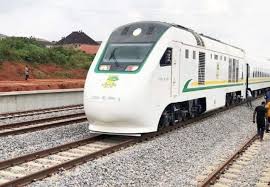 According to a report by The Nation, the Lagos-Ibadan rail line is a double-track gauge rail, the first of its kind in West Africa. It is the first part of a new 2,773km Lagos-Kano standard gauge line.

It is important to note that wearing a face mask, and having an Identification Card – Passport, National ID, Work ID, or Voters’ Card – is compulsory to buy a ticket at the counter.

There is also 5 minutes stopover at Prof. Wole Soyinka Station, Laderin, Abeokuta. Travellers going to Abeokuta will alight and while those going to Ibadan/Lagos will also join the train.

The train departs from Chief Obafemi Awolowo Station, Moniya, Ibadan at 8:00am and arrives Mobolaji Johnson Station, Ebute Metta, Lagos State at 10:41am.

The train has only one coach for the First Class, two coaches available for the Business Class.

The new service is operating on a limited schedule with just two trains a day but will expand to 16 daily departures once construction on stations are complete.

Directions:
Mobolaji Johnson Station, Alagomeji, Ebute Metta;
Go on the road from Ojuelegba through Tejuosho to burst out at yaba. Once you get to the end of tejuosho road, turn right and just keep going down like you are going to the end of the road. Keep looking at your right where you have the BRT lane, you would see Alagomeji bus stop. Right next to the bus stop is the entrance to the train station.

Chief Obafemi Awolowo Station, Moniya, Ibadan;
The train station is at Moniya. It is a 10 minutes drive from Ọjọọ main park in ibadan, and about 20mins to Iwo road park (if there is no traffic).

It is important to arrive at the train station at least 30 minutes before departure time. This is to allow you have time to purchase tickets and register.