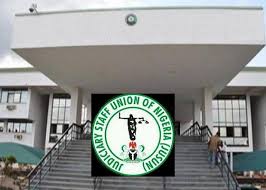 The the judiciary staff have announced their decision to get back to work. This came by, after a National Executive Council meeting, held on Wednesday.

In a communique released in effect of the decision and signed by the Deputy President, Emmanuel Abisoye; and General Secretary, Isaiah Adetola, “NEC-in-session discussed extensively and after putting so many issues into consideration i.e the intervention of NJC and other stakeholders, the NEC has resolved that the strike is hereby suspended”.

Judiciary Staff Union of Nigeria (JUSUN) commended the role of the National Judiciary Council (NJC) in ensuring the compliance of the state governors with the Memorandum of Agreement earlier signed, and the resolution of the financial autonomy of the judiciary.

TVR recalled that the judiciary workers had resorted to a nationwide indefinite strike, on 6th of April, to protest the denial of their financial autonomy as stated in the constitution.

The strike, which consequently prevented the arraignment of suspects had also led to overcrowding at Police stations across the country.