Unilorin Final Year Week: It Is Not Bye Bye, But See You Again. 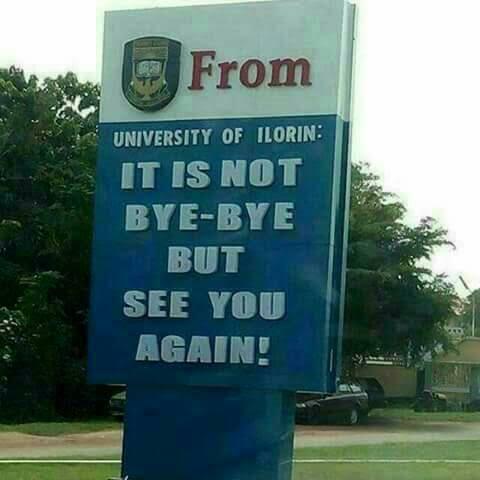 The finalists of the ‘Better By Far ‘ citadel of learning, the University of Ilorin, Kwara State have all been in a joyous mood as they were seen around campus looking all gorgeous and beautifully dressed for their Final Year Week.

The Final Year Week began a week ago in several faculties, although it seems like some faculties had to put a hold on theirs for reasons best known to them.

Some Faculty departments like Arts, Law, Education, Physical Sciences, Social Sciences however, have been spotted on campus in several costumes and attires.

The outgoing students were seen actively participating in several activities like Corporate day, Career day, Cultural day, Jersey day, Back to School, Costume Day and the Sign-Out Day among others.

On the Career Day, students dress in costumes, representing the occupation of their choice upon graduation.

The Cultural Day; the finalists dress in their traditional attires, both male and female.
The day is almost mistaken for a prominent person’s wedding ceremony.

The Sign-Out Day is usually the highlight of all activities because the students go around wearing plain T-shirts and holding several coloured markers, with smiles on their faces welcoming anyone who wishes to sign or write names on the shirt. It’s usually an interesting experience as all social media platforms are bombarded with pictures and videos, and we all have something entertaining to feed our eyes on.

These activities gives the school a very colourful look, with felicitations flying in the air.

For the finalists, it’s been four years of hard work, constant studies, and sleepless nights. We can only wish them success as they prepare to write their final exams next week.

Unilorin TVR wishes them nothing but the best as they prepare to enter the Labour Market; It’s not bye bye but see you again.

Send an email to favouranthonia24@gmail.com to submit informations on happenings in your environs.

5 thoughts on “Unilorin Final Year Week: It Is Not Bye Bye, But See You Again.”